Democrats borrow from the U.K. for convention branding

So much for orginality. Radical socialists in England have used "People's Convention" as a banner for years.

And it's not just a title from distant history. Use of the term "People's Convention" has recently seen a resurgence in the U.K.: 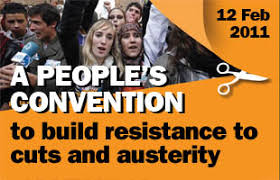 If "Win the Future" (WTF) was bad, "The People's Convention" is worse.

Do Democrats have no sense of history? Perhaps it's even more scary if they do.
Posted by Doug Rink at 1:35 PM