It appears the Department of Homeland Security considers how much ammunition it buys a confidential matter between buyer and seller. Somebody's taken a black marker and redacted this recent ammo acquisition order. 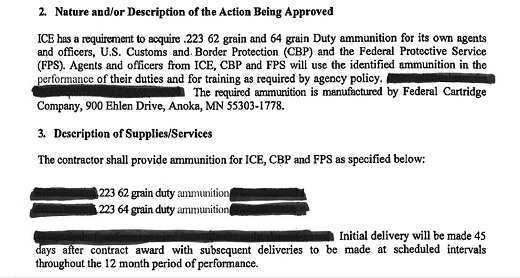 Ammo under this contract award dated July 30, 2012 cost the government over $4.6 million dollars, but I don't see any place where the number of rounds is disclosed. That detail is probably among those obscured under the black marker. I have no idea how long the redacting policy has been in effect.
Posted by Doug Rink at 8:09 AM