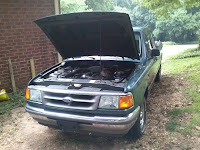 Spent part of the day looking for a used horn pad for a 1995 Ford Ranger.

The switch inside the old pad sticks. Tap the horn, it keeps blowing. Grip the wheel too hard, or roll over a speed bump, beep beep.

Ford incorporates the horn switch in the pad with the airbag. You can't get to the switch to clean, re-position or replace the actual switch.

A Ford dealer quoted me $1200 for a new replacement. Sounds a little steep to me.

Update: Looks like I got bad information. Now that I've removed the air bag, it appears the horn switch is separate from, and below the pad on my model. I've blown out dust on the contacts, moved and taped a couple wires that were dangling loose near the contact points. Seems to be working.

Maybe Ford went to a more complex design on later models. But mine seems to be a simple enough fix. If this doesn't hold, maybe I'll go scavenging for a new steering wheel.

Cautionary note: Always disconnect the battery before working with an air bag component. And let the vehicle sit a while so components have time to discharge.  Last thing you want is an accidental deployment.
Posted by Doug Rink at 8:21 PM