Pop. With all eyes on Syria, Obama springs executive action gun control on the folks here at home.


Today, the Obama administration announced two new common-sense executive actions to keep the most dangerous firearms out of the wrong hands and ban almost all re-imports of military surplus firearms to private entities.

For more than 50 years, the federal government has advocated civilian ownership of firearms like the World War II era M1 Carbine and the M1 Garand through programs like the Civilian Marksmanship Program and its predecessor. 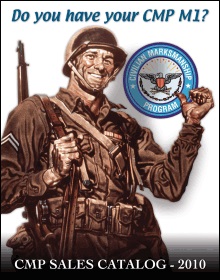 Now Obama declares these arms to be too dangerous for civilians to be trusted with, so he's going to choke off future supply.

The move comes less than a week after the Civilian Marksmanship Program announced it is cutting back on its store hours because of dwindling rifle inventories. It remains to be seen if the CMP gets an exemption to Obama's new re-importation ban, but the way the AP crafted its story, it sounds unlikely. On the other hand, does anyone at the AP even know what the CMP is?
Posted by Doug Rink at 10:44 AM