"Rebellion to tyrants is obedience to God" 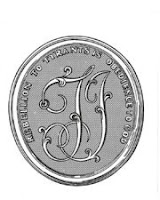 "Rebellion to tyrants is obedience to God" was a motto suggested for the Great Seal of the United States, but never used. (Thomas) Jefferson eventually appropriated it for this seal. The ultimate source of the motto is murky, but the best guess of scholars at this point is that Benjamin Franklin probably made it up.
Posted by Doug Rink at 12:21 PM