We used to have a republic 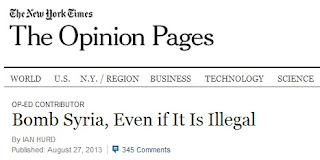 We were once a nation governed under rule of law.

Signs increasingly signal that may no longer be the case. Whims and emotion rule the day.

Need an example? Check out this op-ed headline in the New York Times.

Update: Seems Ian Hurd, the same prof that wants to see us rush in and bomb Syria, didn't see Benghazi as a big deal. Just some locals vying for attention.


"This is not part of an organized international effort. This is a very local group of people," explains Hurd. "It looks like, very local political goals within Libya to weaken the Libyan government and to shock the population into talking about the issues they want to talk about."

If Benghazi was a local-yocal thing, why does the Obama administration keep it shrouded in secrecy nearly a year after the fact?
Posted by Doug Rink at 1:31 PM