Statement from the CMP

Earlier today, I received an email from the Civilian Marksmanship Program that said:


Recent news articles and references to the demise of the Civilian Marksmanship Program are erroneous.  Business and programs continue as usual.

We appreciate the continued support of all our customers.

Okay, but do tell me more. 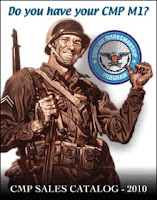 CMP shooting and marksmanship programs extend well beyond military surplus sales, but keep in mind its the surplus rifle sales that have historically funded the organisation.

The Civilian Marksmanship Program, a 110 year old organisation created by Congress, has been selling Garands and carbines to qualified American civilian shooters since the 1950s. When the Obama administration announced its new re-importation policy on August 29, I didn't jump to conclusions.

But I did ask what this might mean for the future of the CMP's surplus rifle sales programs.

The CMP has traditionally obtained its rifles through the U.S. Army, often after the arms had been returned to the army by allied foreign nations. Now with the Executive Branch on record that it opposes re-importation of Garands and carbines for the civilian sales market, it remains to be seen whether the DOD will continue to provide repatriated arms for distribution by the CMP.

For the time being, it's still business as usual at the Civilian Marksmanship program. And that's good. Its warehouses in Alabama and Ohio are still packed with cases of Garands (many of them apparently still un-inspected). But long term, I think the picture's still murky about the prospect for selling military surplus rifles going forward.

Except for a handful of highly collectible ones that get auctioned from time to time, the CMP sold out of M1 carbines several years ago - and has long said it expects to receive no more.

Eventually, that will likely be the case with Garands as well, though an obstructionist Executive Branch could conceivably cause the available supply to dry up at home before military warehouses overseas are exhausted.
Posted by Doug Rink at 11:53 AM