This almost seems just too convenient.

Got your tin foil hats on?

Some have predicted things like this might happen as an economic collapse nears, or as Mr. Obama's progressive transformation of America moves from "nudge" to "shove."

While I'm not partial to conspiracy theories, it is quite the coincidence that this EBT glitch comes during a government shutdown - and on the verge of bumping into a debt ceiling.

Sound kooky that the government might orchestrate such a thing as a means of applying political pressure?

Who'd have thought three weeks ago that the national park and forest services could be transformed overnight into partisan Brown Shirts used to close parks, harass tourists, close businesses, and rip people from privately owned homes on leased federal lands. 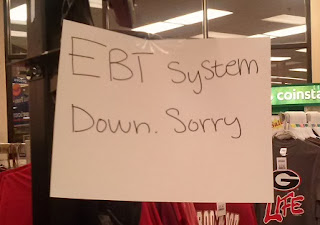