Bureaucrats. How'd Santa ever get along without 'em?

Here's a goodie from the archives at Library of Congress...

From the description that accompanied this 1927 photo:


Santa Claus receives aeroplane pilot's license from Assistant Secretary of Commerce. Although there may not be sufficient snow for his reindeer sleigh, Santa Claus will still be able to deliver his load of presents on time this Christmas by using the air route. The old saint called at the Commerce Department in Washington today where he is shown receiving an aeroplane pilot's license from Assistant Secretary of Commerce. for Aeronautics William P. MacCracken, while Clarence M. Young (right) Director of Aeronautics, Department of Commerce, looks on. Airway maps and the assurance that the lights would be burning on the airways Christmas Eve were also given to Santa.

Silly bureaucrats. Santa was hittin' rooftops without a problem long before these long-gone bureaucrats came along. Here's an etching from 1889: 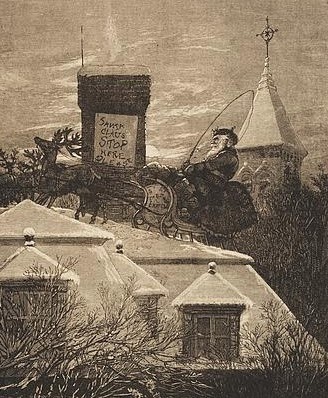