Last weekend, I came across a self defense guide for women published in the mid-70s.

Looking Forward To Being Attacked was written by Jim Bullard, who at the time was a lieutenant with the Memphis Police Department.

A couple of excerpts from the first page of the first chapter: 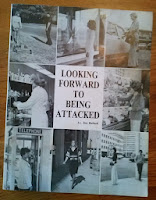 The delightful subject of this book is your being attacked; attacked on the street, in a parking lot, in an elevator, in your car, in your bedroom, in the library's social science section, in your dentist's office, etc. Wherever you are in today's social climate, your are subject to attack which is terrific because when you finish with this book, you are going to be looking forward to being attacked!


There is very little you can do about being subject to attack, but there is a big difference between being the subject of an attack and being victim of that attack. The attitude you must adopt is that you will not let anyone spoil even three minutes of your day. This attitutude is an important element in your defense... Take offense every time offended - react in anger, not in fear. Channel anger in a positive direction and if will work for your self defense. Fear is crippling, but anger will give you strength of courage to do what you must do.

Things sure were different in the era before political correctness. It was okay to be angry. And if attacked, the prevailing strategy was to prevail against your attacker with force.

Guns were not part of  Bullard's self-defense strategies. The book is from an era prior to the resurgence of concealed carry in America. But Bullard wasn't shy about advocating deadly force. If confronted by a burglar, Bullard advised:


If he shows interest in you, let him get close enough but then kill him... Close his throat or take his eyes out. Remember, don't attack him. Let him escape if he will. However, if it's hurting you he has in mind: kill him. Don't let anyone spoil three minutes of your day; no one has that right.

Today we're told we're supposed to get weepy, show regret, even apologize if we're put in a position where we're forced to defend ourselves. By Bullard's logic, today's philosophies and prevailing attitudes would seemingly tend to put a defender at a huge disadvantage from the start.

Bullard's advice on self defense relied primarily on smarts, anger, and quick martial arts like moves by the defender's body. Today's progressives often insist, or at least imply, women aren't smart enough or strong enough to physically defend themselves against an attacker. Is what they preach today really progress?
Posted by Doug Rink at 12:04 PM