I bought a 20 pound bag of white rice this week. The contents filled 11 one-quart mason jars - with about a half jar left over. 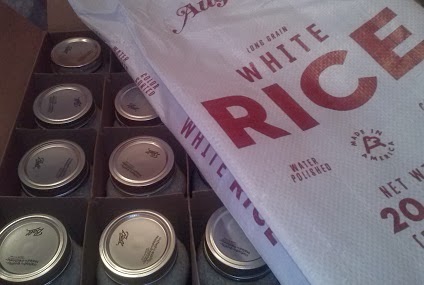 A cup of rice makes a serving for four people.

Assuming a cup of rice, when cooked, is split four ways, that's about 4 cents per person per meal.

This time, I've added the step of heating the filled jars in the oven at about 220 degrees for forty minutes along the lines of the old "oven canning" method. However, rather than let the cooling seal the jars, I still use the vacuum sealer shortly after retrieving the jars from the oven. The idea being, the heat further sterilizes the container, and kills potential impurities. And while the vacuum sealer is used to seal the jars, there's an even stronger vacuum created because after sealing, the cooling adds to the internal vacuum.

In an emergency situation, I figure a case of 12 mason jars of rice will feed a family of four for two weeks. Much longer if other items are mixed in or alternated with other long term storage food to create a more varied, balanced menu.

Even in regular times, rice is a food budget stretcher.

We had rice with our fish dinner the other night. The next morning, I had some leftover rice with little butter on it for breakfast. Then for lunch I had more rice, this time mixed with a little spicy Chinese mustard. Each meal providing a distinctly different taste experience.

Bottom line, long term food storage need not be a complex or expensive affair. It's just that people are so used to prepackaged stuff, the mechanics of storage are somewhat of a mystery to them - so they assume it too complex to do themselves.
Posted by Doug Rink at 4:10 PM