No. No. No. Please. No more talk of Romney running again.

You may have seen or heard it in passing.

Talk that Mitt Romney is considering another run for the presidency, or is being encouraged to run.

Romney's photogenic post-election surrender to Obama should have been enough to preclude another GOP nomination being up for discussion.


In his heart, it seems Mitt Romney never shed his progressive roots. Or perhaps Mr. Romney is simply naive as he lends credence to the president.

The Romney-Obama photo reminds me of another. One shot in 1938 as British Prime Minister Neville Chamberlain met with the leader and chancellor of Germany. Not every gesture of good will means something good lies ahead. 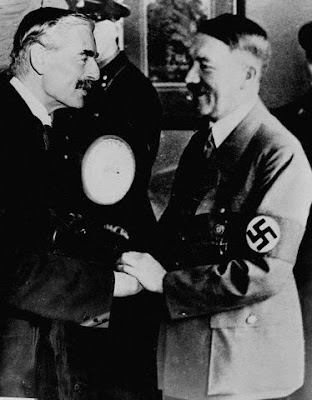 Mr. Romney likely meant well by today's handshake at the White House. Mr Chamberlain meant well too. But attempts at appeasement or concession often carry a high price down the road and, at the very least, that's what Mr. Romney's gesture looks like.

I'd feel better about having voted for Mitt Romney if I knew for sure his talk about conservative values was more than just election rhetoric. I'd feel better about the Republican Party if its 2012 nominee didn't look so eager to endorse a president and an agenda he supposedly campaigned against for the past two years.
Posted by Doug Rink at 10:10 AM