I recently picked up a very nice "Recruit" Swiss Army knife, and I'm really liking it. 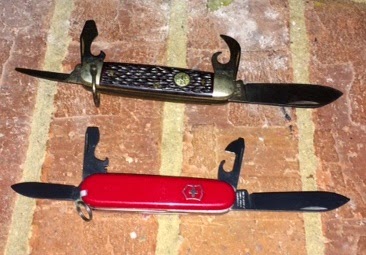 Slightly smaller than the old Boy Scout pocket knife I've had for years, the Recruit has nearly the same features, and my scale weights it at only 1.54 ounces compared to 2.94 ounces for the Scout knife. There's a second smaller blade on the Recruit where a Scout knife has the awl.

Sure, there's Swiss Army knives with bunches of more gadgets. But they can be fat and heavy. The ergonomics of the Recruit seem about perfect as a gadget knife can get.
Posted by Doug Rink at 5:30 PM