Fire Speaker Boehner. Are you workin' it?

Haven't pulled together a lot of thoughts for blog posts the past couple days.

I've been banging away on social media expressing grave displeasure with CRomnibus passage, and encouraging my congressman to vote 'no' on another term as speaker for John Boehner.


In the process, I've noticed something. While most members of Congress have Twitter accounts or Facebook pages, few constituents make use of them.

Well, we need to start using them. Posting a social media comment or response is a great compliment to a more formal email to express your viewpoint, ask your congressman for a desired action.

Here's how my Congressman tried to put positive Facebook spin on his vote for Cromnibus approval: 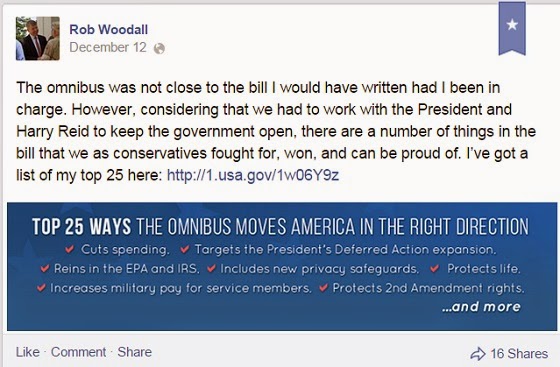 I'm among those who posted a reply:

Keep it short. Try to be polite. But it's okay to be firm.

Put enough "Fire Speaker Boehner" tweets in his timeline, maybe these guys will get the message.

My Twitter efforts have been more of a shotgun approach. Some tweets to my rep, but I've included other reps as well. Others are simply a blind call for action.

Can you believe this? DC Republicans brag #CRomnibus is just what we asked for. https://t.co/c3oyIKpeh7 Care to set 'em straight?
— Doug Rink (@TalkSouthRadio) December 15, 2014


I've also tweeted various Republican activists and organisations asking if they'll join us in our call.
Posted by Doug Rink at 9:42 PM