The solar-charged battery bank is powering a 24/7 night light in the basement, two other areas in the basement now have solar powered 12 volt ceiling light fixtures, and I'm using the bank and an inverter to charge other batteries from time to time.

I've added a second 100 watt panel (wired in parallel), and the battery bank was back to full charge by 9:30 this morning. Skies are lightly overcast.

This has me wondering. Should I consider some means to switch from charge controller to a small grid-tie inverter once my batteries are at full charge? Since my batteries are nearly new, should I add another 35ah AGM battery to the four already wired in parallel? Or should I simply proceed with expanding the existing system's the load, and experimenting with how much use I can get out of it as-is? 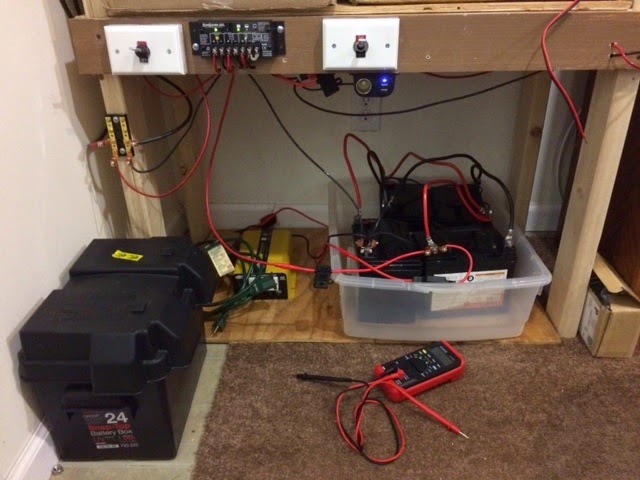 I've upgraded my charge controller to a Morningstar SunSaver 20L for 12 volts. The amperage capacity is less than the controller that came with my initial Renogy kit, but the SunSaver is of a heavier-duty type construction, and carries a five year warranty.

The battery in the foreground is not wired into the system, it's an RV type deep cycle AGM intended as a mobile power supply for a second 300 watt inverter. Among potential uses, I can tote it to the second story and run lights or electronics when power's out. It can also serve as a backup if the main battery bank approaches low voltage thresholds after dark.

Some of my previous posts on this system are here, here and here.
Posted by Doug Rink at 10:49 AM


Check out TalkSouthRadio. Now on BlogTalkRadio