Bought that blowtorch of a Maglite flashlight I blogged about earlier today.

First test, I looked under a rental property we're rehabbing. Been under it a bunch of times, but never saw it in the light I did today. Where'd that debris and junk come from? Probably been there 25 years, I just never saw it in bright light before. 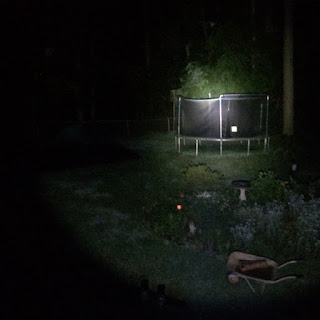 After sundown, I took a look at my own backyard. One flashlight pretty much lit up the whole thing. I was completely impressed. The picture doesn't do justice.

Also popped a Nite Ize LED adapter into an old Mini Mag I've had for 26 years. Not as bright as the new LED Mini I bought last fall, and actually I'm glad. I don't necessarily want a AA flashlight to light up the world. Sometimes I want just enough light to accomplish a simple task, without waking others nearby in camp.

Bought my Maglite ML300L-S3016 at Walmart. Sometimes, I just like being able to walk into a store and buy something. Too often these days, the good stuff has to be ordered online.

While in Walmart, something else caught my eye. Rayovac LED conversion bulbs for two or three battery flashlights. Not as beefy as the Nite Ize offerings, the Rayovacs came in 30 or 40 lumen brightness ratings. But each was priced at only $3.97, so I bought a couple, and upgraded some cheapo flashlights I keep stashed around the house.

Now that I've got some hopped-up flashlights, I guess I'd better start scouting for batteries on sale.
Posted by Doug Rink at 11:20 PM