What flag is the real target?

Sorry, I'm just not buying it.

I don't sense the scope or scale of the so-called mass movement pushing to purge the south of Confederate flags and memorials is nearly as big as its backers claim.

I'm not really sure it even qualifies as a mass movement, though it certainly is an orchestrated political one.

And I've begun to suspect the targeting of Confederate imagery is part of a set up for something bigger, that Confederate flag and vulnerable memorials are being exploited to create a sense of validity for the need to purge "racist" symbols, and when successful, then the the trap gets sprung. Targeting of "racist" symbols will be expanded.

Consider these photos of Ku Klux Klan activity found in the Library of Congress. Take note of what flag the Klan flies.


Another shot of the 1925 rally, best I can tell, fails to show any Confederate flags, though U.S. flags can be seen. This shot also knocks the stereotype that the Klan was exclusively southern. It was also not exclusively male.


One more photo, from a Klan stage production in Texas in 1924, shows no Confederate flag, but reveals display of the U.S. flag wasn't confined to Klan factions in the north. 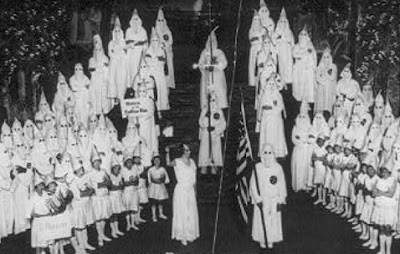 I don't have to go out on a limb to predict we'll soon hear hyperbolic cries that the "racist" Stars and Stripes, like the Confederate flag, must also come down. Todd Starnes at Fox News noted several months back that some are already conducting an open campaign.

Of course, the set up to diminish or vilify Old Glory probably goes a lot farther back.

Lefty protests and opt-outs over the Pledge of Allegiance are but one example.
Posted by Doug Rink at 10:27 AM