Back in 1990, I needed some 8-inch boots in a hurry. My visa had been approved, and as a journalist, I had an invite to travel Saudi Arabia to report on some of the Georgia-based troops deployed with Operation Desert Shield. 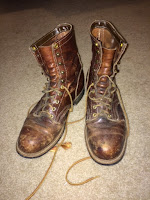 The boots didn't need to be anything special, just something that could get me through, at most, a week or two in the Saudi desert. I ended up picking up a pair of brown all-leathers at Walmart. I recall I paid about 30 bucks.

Now, 25 years later, I needed some replacements.  After an incredible amount of use, on all kinds of outings and adventures, the soles on my old standards had worn pretty slick, and become slippery on wet surfaces.

Earlier this week, I picked up a set of black Tacticals at Academy. Again, budget bootery, but I didn't slip and slide when I ventured out in the rain this morning.

I harbor no fantasies that these new boots will last the next 25 years, but at least I have a pair at-the-ready for hiking or fishing, or any other situation calling for ankle support and substantial footwear.

And I'm still pondering whether I can craft some cuts in the soles of my old pair, something to retread and restore some of the traction that's been lost to wear. The uppers are still in great shape.

Update: While I was thinking about it, I took the old slick sole boots out and used a grinding wheel to carve in a little "retread." The forward soles were worn slick, but plenty thick and seem to have taken the carving well. Going to have to wait for the next rain shower to see if much of the old "grip" has been restored.
Posted by Doug Rink at 12:13 PM