Duck and Cover and other dangerous games

Whatever he is, Paul Ryan's no leader.

He's more like Bert the Turtle, trying to keep his head down while someone else does the dirty work. 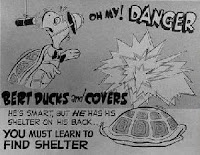 Ryan, the man who the Republican establishment wants to ascend to the role of House Speaker is currently trying to hide behind John Boehner's skirt as the outgoing Boehner works to cram through another betrayal of a budget that will fully fund Obama's agenda to fundamentally transform America through the end of the Obama administration.

Perhaps enough to stir up a military distraction with China so most Americans won't notice the budget betrayal until its a done deal, and allowing Ryan, hand picked by the GOP's Quisling get along gang, ascends to his new role as speaker.

Question: Is the Obama team smart enough to play "wag the dog" without it blowing up in their faces?
Posted by Doug Rink at 8:37 AM