Gen 2 night vision on the cheap 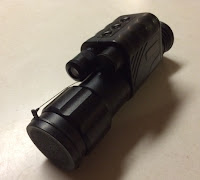 Posted not along ago about my introduction to Gen 1 night vision.

I got lucky, had an opportunity to get a used Gen 2 monocular on the cheap.

An older, used MO4-2 was on eBay Thanksgiving Day, with bidding ending just before 4:00 pm Eastern. Who watches eBay on Turkey Day, right? I placed a bid with seven seconds left in the window, got it for under $200.

Yes, the unit is used, shows some wear, and is likely off from full specs. At times, in some conditions, the image appears grainy, and there are a few small black dot "artifacts" in the image.  But, overall, it's a big step up from my Gen 1 stuff, amplifying light to higher levels, letting me see things farther and more discernible than my Gen 1s can.  It also shows less glare, and has greatly reduced "halo" effect from nearby streetlights or yard spotlights compared to Gen 1. It's a little bigger, a little heavier too, so Gen 1 gear is still the go-to for casual pocket carry.

Point is, my night vision capabilities are now greatly enhanced; and by taking a chance on used gear, I probably saved $700 to a thousand bucks (More accurately, I wouldn't have advanced to Gen 2 if I had to pay retail). Buying used isn't the right choice for everyone, but for those who've done some research, are willing to take a little risk, and have flexible expectations, bargains can be had by those who are patient and diligent in stalking sites auction sites.
Posted by Doug Rink at 12:59 PM