As mentioned earlier, our intrepid 2006 Toyota Sienna, with an odometer just 92 miles shy of 200,000 thousand miles, was clobbered from behind. We've since been told the insurance company's going to declare it a total loss, and based on what we've been told to-date, we concur with the finding. I've been impressed with the way the other driver's insurance has handled things. 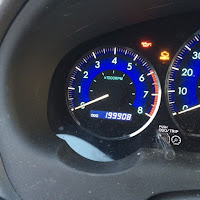 But getting to this point was complicated last week by the nuttiness of the towing company that removed our disabled van from the accident scene, and then later insisted the vehicle had been "impounded" at the request of police.

When the insurance company sought access to the vehicle, the wrecker service insisted "impound" fees would have to be paid prior to access.  First off, this should not have been an impound. Secondly, insurance companies tend not to pay impound fees, as "impound" implies a vehicle seized for some criminal or civil infraction.

My wife contacted the police department, trying to get things straightened out. But when police intervened on our behalf, at least one of the cops who called was accused by the office manager of being my wife's "brother." Eventually, after several Saturday morning phone calls from officials of escalating rank, the tow employees realized they'd dug themselves in deep. They told us to get our own wrecker, get our car, and get out.  They would not show us any paperwork, but they also refused to discuss payment, so we retrieved our van without paying a cent.

With the car liberated from the stigma of "impound", the insurance claim got moving again on Monday.

Also on Monday (or maybe it was Tuesday), my wife got an email from a city official saying the tow company is now on probation concerning its city contract, that it should have transported our car to the body shop we requested on the day of the accident. The company owner apparently blamed "a new employee" for the "misunderstanding." We encountered three employees in the course of our dealings, all played off the same script.

God only knows how many other people may have been screwed over by these blustering people claiming to act under color of law. However, the city tells us ours was the first complaint it's had regarding this company.

We were lucky the police department involved is relatively small agency where the concept of community relations is more than just lip-service. Its people really did go to bat for us. If we'd been someplace where the police were more embedded and ingrained with bureaucracy, we'd have likely been screwed over by tow folks with little recourse.

Near the end of our dealing with the wrecker folks, one of the tow guys said "why don't you just mind your own business and let insurance handle this."

I got a kick out of the dude's comment, he had no idea of the contradiction of his statement.

We pay a high price for the way bureaucracy and middlemen have wormed their way into a system where consumers now tend not to question circumstances and are shield from direct payment of costs.
Posted by Doug Rink at 9:15 AM