While MoveOn.Org received most the headlines and credit for disrupting and bringing cancellation of the Trump rally in Chicago last Friday, not to be overlooked is the role groups of Bernie Sanders supporters played in Friday night's anarchy.

Was interesting to watch 'em on Twitter. One minute, they were bragging about shutting down Trump's rally, the next they were talking about Saturday and Sunday phone banking in the Sanders effort to get out the vote. Sanders campaign branding was obvious in the social media posts.

Some of the more notorious Twitter posts have been deleted, but screen grabs survive. 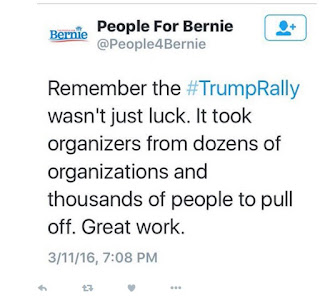 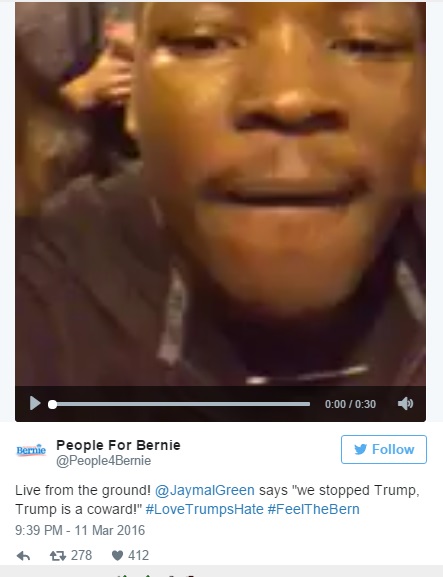 Thus far, Sanders denies the disruptors were acting on his orders. But the agitators and activists weren't shy about invoking his name as they created chaos, shut stuff down. And Sanders himself places all the blame for what happened in Chicago on Donald Trump and Trump's supporters, placing no blame on his own people.

From the Sanders campaign:


Obviously, while I appreciate that we had supporters at Trump’s rally in Chicago, our campaign did not organize the protests.

“What caused the protests at Trump’s rally is a candidate that has promoted hatred and division against Latinos, Muslims, women, and people with disabilities, and his birther attacks against the legitimacy of President Obama

Is Sanders as innocent as he claims? It's clear his supporters aren't, and he's not condemned their actions.

You might think Sanders a doddering old fool, being used as a figurehead as younger, hardcore socialist and anarchist mobs take to the streets. But the campaign statement shows he and his campaign make excuses for, thereby giving these supporters a free pass to the bring chaos to the streets.

Look out for a long hot Spring and Summer 2016.

Do you #FeelTheBern yet?
Posted by Doug Rink at 8:19 AM