Wife took my truck today because her van's down for service, so I'm sitting around tinkering at home. 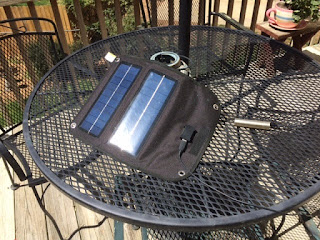 Pulled out a woefully inadequate 5 watt solar charger I've had for years, and set it up to top off an Anker battery that we use to recharge cellphones while on the go.

Got to thinking. Why just use these backup batteries to charge cellphones?

Why not get a USB powered charger for rechargeable AA and AAA batteries, and use an Anker or similar bank to recharge AAs when they run low in an off-grid or on-the-go situation, or when you want to re-charge a couple batteries on the cheap by using sun power?

It's probably not the way to go if you have large numbers of batteries to recharge, but as a backup, I think the idea holds promise (At home, I power most my small battery charging using two 100 watt solar panels and a small bank of 12 volt batteries).

To test the functionality of my ideas, I've ordered an inexpensive USB powered AA charger from Amazon, as well as a 20 amp portable, folding solar charger. Some folks use the AA chargers right off the solar rig, so that too, is an off-grid option.

I'm a fan of Anker products, we've used the battery packs and Anker brand Lightning cords for our iPhones for better than a year, and have never had one fail. Most other non-Apple made cords we tried failed in three to six months. 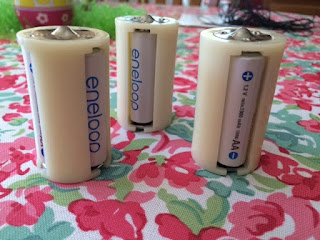 One last think to note before wrapping up this post. I've mostly given up buying D cell batteries. Alkaline D cells are expensive, are getting hard to find in bulk packaging. and not all battery makers make Ds in NiMh rechargeables.

What I'm using instead are adapters that hold three AA batteries in a holder that's the same size as a D. They work with either one, two or three batteries per holder, with the three battery configuration giving battery life on-par with a D. So far, they've worked in my radios, flashlights and LED lanterns without fail while delivering some seriously long run times.
Posted by Doug Rink at 3:18 PM