My first gallon batches of homemade wine have been fermenting/aging for two months now. 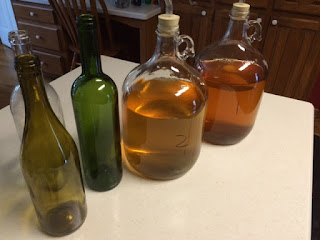 I've done several re-rackings along the way (That's when you siphon off the wine to eliminate sediment that's accumulated on a jug's bottom).

Batch one, using wine making yeast and started out with an airlock, is a disappointment. It has an aroma and even perhaps a bit of taste like the rubber stopper that held the airlock. Perhaps I should have cleaned it better, or even boiled the stopper, prior to use.

Batch number two, started out with a balloon, not a rubber stopper, doesn't have the rubber aroma. I've used a rubber stopper and airlock on this batch after the initial fermentation, but no odor has been imparted. This is quite the tasty homebrew.

My guess is whatever the odor is, was perhaps imparted during initial fermentation.

May go ahead and bottle batch number 2, while chalking batch 1 off to experience.

Gonna also put some effort into de-odorizing those rubber corks.

Update: Airlock on batch #2 still shows signs of activity, so going to put off bottling another few days at least. And I've noticed the airlock stopper used on batch #1 puts off a much stronger odor than the stopper used on #2. Even boiling doesn't seem to less the odor. Did I get a stopper made from a bad batch of rubber?

Update II: Did the stopper give odor to the wine, or was it the other way around? Either way, batch #1 is down the drain. And batch #2 has gone to the fridge to put a check on any further fermentation. Perhaps I  should have put a chill on things a few weeks back.