Wonder what was going on here.

Saw this around 1 o'clock (or a little after) today driving on Georgia Highway 16  between Griffin and I -75. 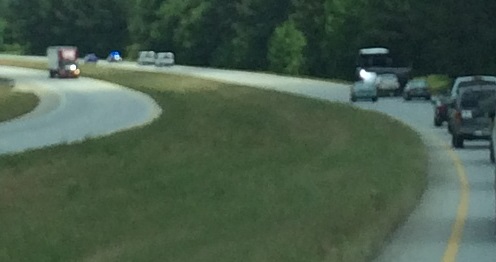 Two law enforcement vehicles driving abreast in advance fo two white vans. After a gap of some distance, there's a truck with an odd configuration, with three small cars, in a triangular formation, either being towed or driving close behind the truck. Another gap, and there's two more police or sheriff's cars running a rolling roadblock to keep other traffic back from the odd motorcade that ran at about 40 miles per hour from just outside Griffin to I-75.

Opposing traffic on the divided highway was not restricted.

Never could get close enough to see what kind of configuration was on the truck. Or whether the three cars had people in the driver's seats.
Posted by Doug Rink at 8:46 PM