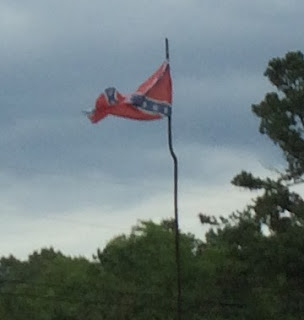 In spending time in upper north Georgia a year ago, I recall seeing a few Confederate battle flags on
display. The time was within a couple of weeks of the shooting in Charleston, and followed calls by those on the political left to ban display of the flag.

Last week, in many of the same areas, I seemed to see more Confederate flags on display. Maybe a ten-fold increase. Maybe more,

One or two were flying in front of businesses. Some from poles in the beds of pick-up trucks. Most were displayed porch rails or in residential yards.

To be fair, I'll note that I include Georgia's former state flag, the one incorporating the Confederate battle flag on its field, in my loose count.

I'm thinking efforts to shame or ban display of this flag may have actually resulted in more people flying it.  And the further you get from urban zones of political correctness, the more of these flags you see.
Posted by Doug Rink at 9:18 AM