Tried to convince my wife she needed a Toyota 4Runner, but she's into Honda comfort, so she settled on a gently used 2015 Pilot.

I took what was left over and picked up a used low mileage 2012 Subaru Forester.

Mountain roads were taking a beating on the Odyssey van the Pilot replaces. I've been depending on my old Ranger pickup as a daily driver since my Sienna got totaled in a hit-from-behind wreck in February.

What sold me on a Subaru? When my wife stopped at a dealer to test drive, the salesman told her to hop a curb with it. Ground clearance in a Forester is about the same as a 4Runner, and stands more than an inch higher off the ground than a Pilot. 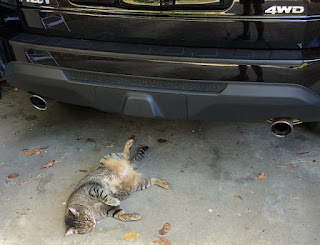 Cat Max seems to like the Pilot. He pretended to be road kill after we parked it in the garage.
Posted by Doug Rink at 8:59 PM