It's sitting on a shelf gathering dust for ten to 15 years. 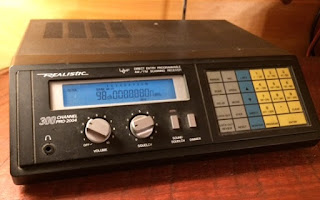 It's an old Radio Shack police scanner I picked up in 1988 when I moved to Atlanta to work as a news reporter. Not a trunk-tracker, but back in the day, it did a pretty good job when eavesdropping on public safety frequencies around Atlanta operating on VHF up to the 800Mhz band.

Problem was, most metro agencies have long abandoned their FM radio transmissions, and moved on to digital formats, many using some types of encryption.

So the radio sat.

Until I brought it up to the mountain last week.

A bunch of the police, sheriffs and fire services in North Georgia appear to still be using FM narrow band radios on VHF frequencies.

Kinda neat to be able to hear police and fire again. Also kinda neat to hear how few transmissions actually go out compared to the non-stop calls I was used to hearing back in the days I monitored urban and close-in suburban agencies.
Posted by Doug Rink at 9:40 PM