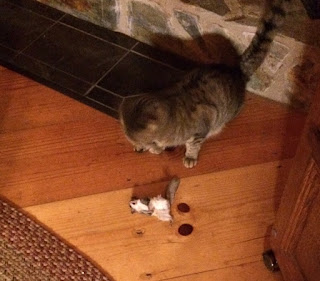 For weeks now, we've heard a squirrel (or squirrels) rumbling around behind the pre-fab fireplace in our cabin. Tonight, one (and hopefully the only) squirrel managed to get inside the metal fireplace box, and then worked his way into the living room.

Squirrel's victory was short lived however. Chessie cat was ready and waiting in ambush.

Once the squirrel was sufficiently stunned, I managed to get it away from the victorious cat, and tossed it out the front door.

Chessie got a sampling of Friskie's "Party Mix" cat treats as a bounty for his catch, and being willing to surrender it without blooding the floor. .
Posted by Doug Rink at 10:16 PM