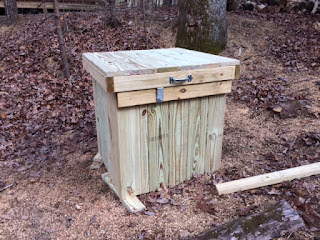 My first attempt at a "bear box."

You don't put a bear in it. It's where you put the trash can so bears don't make a mess of things.

Lumber's gotten expensive. Took about $75 worth to put this together, plus another fifteen bucks for a "wet wood" saw blade. Screws, another seven or eight bucks, plus another half box I had on hand.

Still, it comes in about $60 less than I've seen pre-assembled similar sized boxes.

And by building it myself, I could take in pieces to where I needed to place it. These things are a bear to move around once put together.
Posted by Doug Rink at 2:46 PM