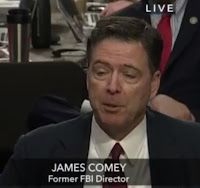 Former FBI Director James Comey outed himself as a leaker, labeled himself a coward in testimony before a Senate Intelligence Committee Thursday.  A guy like that had no business being left in charge of the FBI. To his credit, Comey did debunk a big chunk of the MSM's anti-Trump reporting. But the reality of Thursday's  testimony will likely do little to stem the TDS (Trump Derangement Syndrome) affecting many in DC.

I did enjoy listening to NPR Thursday afternoon as the hosts inserted plenty of "what-ifs" and spun more potential conspiracy theory in attempts to make Comey's testimony look like a winner for the anti-Trump movement.  The usual NPR smuggness seemed to be missing, however.  I guess it's hard to sound smug when you're deliberately stretching as hard as they were.
Posted by Doug Rink at 9:01 AM