Over the past century and a half, media's dished out countless cartoons of presidents running over (or about to run over) this or that with a locomotive.

But let Trump retweet a cartoon with a Trump train and a CNN figure?

Do those expressing shock, horror, or other condemnation not realize trains can't randomly target stuff? Trains can only hit what gets in their way. 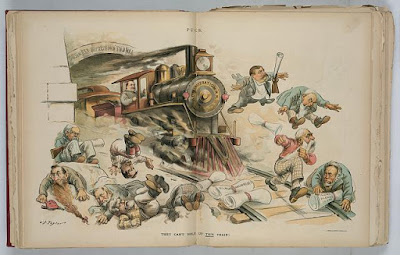 The meme of a president running a locomotive toward obstructions or obstructionists is one of the oldest and most used in political cartoonery.

I seriously doubt anybody freaked when Grover Cleveland was shown barreling through legislators with one.
Posted by Doug Rink at 4:52 PM