Doing good to the poor...

In my youth I travelled much, and I observed in different countries, that the more public provisions were made for the poor, the less they provided for themselves, and of course became poorer.

And, on the contrary, the less was done for them, the more they did for themselves, and became richer.

-- Attributed to Benjamin Franklin, writing under the pseudonym "Arator", in The London Chronicle, November 1766

Fascinates me how the American founders seem to have a better grasp on human nature than many of today's so-called social scientists.

How CNN pitches a poll on the caravan...


How the actual pollster pitched the same survey...

Public Divided on Whether Migrant Caravan Poses a Threat
Posted by Doug Rink at 1:35 PM No comments:

Get ready. Plan for the uncertain future

Many Americans have already "gunned up" in case political games freeze access to arms and ammo.

With the uncertainty of 2020, this may be last call before government gives into its tyrannical nature and chokes supply.

Democrat says if there's opposition to gun confiscation, a nuke armed military will make short work of it
Posted by Doug Rink at 10:01 PM No comments:

Who counts the votes

“I consider it completely unimportant who in the party will vote, or how; but what is extraordinarily important is this — who will count the votes, and how.”
The Memoirs of Stalin’s Former Secretary by Boris Bazhanov, published in 2002. Translated from the Russian, the version which, according to Bazhanov, was uttered in 1923 by Stalin

Thought on a Sunday night

The fall of America is happening before our eyes. Most of us completely blind to the build up to where we are today, others of us under estimated it. A few saw it, and we were called paranoid or delusional if we dared to say what we saw was happening.
Posted by Doug Rink at 7:40 PM 1 comment:

Among the things Netflix wanted to know: 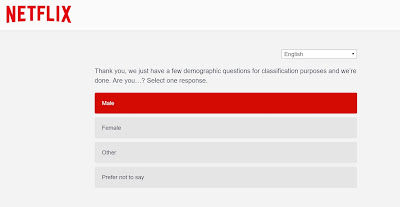 Off the cuff assessment

Democrats retake control of the House, but I've heard mention that some of the Republican incumbents who lost have been soft on their support for the president. Ambivalent House leadership, failure to repeal Obamacare, and a series of budgets that have enlarged national deficits and debt all came back to punish the GOP House.

It appears Republicans have gained at least one Senate seat, with potential to add more, very important for Trump judicial nominations, and any treaties Trump may negotiate.

Expect the new Democratic House to fight Trump and the Republicans in far nastier manner than Republicans fought Obama, nastier than the Democrat House majority after 2006 went after Bush. Risk for the Democrats over the next two years is they become seen as the party of whining obstructionists, the party pushing division and dysfunctional government, thereby alienating those who voted for them in 2018.

That's how things look to me after awaking at 4am to catch a quick update.

It would also appear Georgia's governorship and the governorship in Florida may remain in Republican hands, perhaps giving some regional buffering to the chaos Democrats will attempt to instill by way of Washington.
Posted by Doug Rink at 4:57 AM 1 comment: