Matt Taibbi's a journalist probably best known for his work at Rolling Stone.

Bernie Sanders once cited Taibbi as a journalist who "speaks truth to power."

Taibbi writes of turmoil in the federal government, a government that finds itself caught up in a "permanent coup."


I don’t believe most Americans have thought through what a successful campaign to oust Donald Trump would look like. Most casual news consumers can only think of it in terms of Mike Pence becoming president. The real problem would be the precedent of a de facto intelligence community veto over elections, using the lunatic spookworld brand of politics that has dominated the last three years of anti-Trump agitation.

If Americans were still mostly a thinking people, thoughts like this would have dominated discussions three years ago.

Instead, we've been lead down a path the nation will likely long regret.

Also saw this on social media this morning. I pretty much hate how true is rings today: 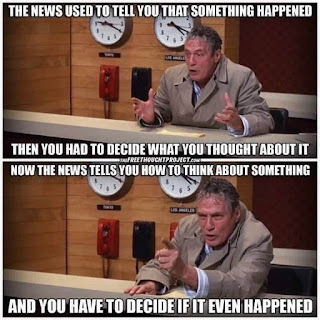